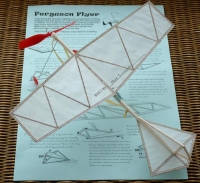 The FERGUSON FLYER is Inspired by Bill Hannan’s AM/FM design and in celebration of Harry Ferguson (who is depicted piloting the model) the first person to build and fly his own aeroplane in Ireland. This model is intended to be built by people who have some experience of building models such as the BMFA DART.
The FERGUSON FLYER is a 33.5 cm. Wingspan, rubber powered model and is made in a similar way to the BMFA DART. However with its diagonal ribs and its two part fin it is harder to build than the BMFA DART. This model can take off from a smooth surface and be flown in a sports hall, gymnasium or outside on a calm dry day.